What is a Good Projector for a Home Theater?

We have gone past the time where projectors are limited to offices and cinemas. Nowadays, a good projector for a home theater is commonplace.

The technology home theater projectors are built with matches that of TVs making them way better than the presentation tools we used to know them for.

Certain advantages such as big screens that projectors have over regular TVs are making them gain fast popularity.

You don’t want to spend a fistful of cash on a 120-inch TV only to find that you could have gotten a projector that can do the same things, and then some, for a lesser price, do you?

You can learn how to set up a home theater system in a few easy steps. Or if you want to dedicate an area of your home to home theater, go here.

As you read on, you might as well find out a home theater projector is a better option than the TV you’ve been eyeing.

Today, we’ll tell you what a good projector for a home theater is and help you make the best choice based on your needs.

If you’re ready, let’s get started!

There are two main types of projectors based on how they display pictures: LCD (Liquid Crystal Display) and DLP (Digital Light Display). Either type has its pros and cons but you can rest assured manufacturers are constantly improving on their performance.

This technology has been in use for a while and is commonly used in a lot of display applications. Most of the screens you see today from your phones to TVs use this technology.

LCD technology is also adopted in the design of video projectors. However, the application is a bit different from the way it is popularly applied.

Rather than arranging an array of LCD chips on a screen, as it is with TV, video projectors use 3 LCD Chips that are specially designed to create and project images on an external screen.

Video projectors too have screen resolutions and their display is also measured in pixels. However, in this case, the number of pixels on each LCD chip is what determines the projector’s resolution.

With few exceptions, some projectors use a pixel-shifting technique that allows them to display a higher resolution even though their LCD chips don’t pack that many pixels. For instance, such projectors can display pictures near 4k resolution while they only have about enough pixels to display at 1080p.

One disadvantage of an LCD projector is the screen door effect. Remember we said the chips have pixels on them. These pixels have tiny lines of borders separating them.

So, if you reduce the screen resolution to a point or increase the image too far, the borders become visible and the image looks like you’re watching it through a screen door.

Don’t worry, this effect won’t happen if you go for an LCD projector with a resolution of 1080p or higher since the pixels are tinnier. Moreover, who wants a lesser resolution in their home entertainment these days?

This technology was created by Texas Instruments. It is mostly used in video projectors even though it can work well in other forms of applications.

A lamp creates light and sends it through a color wheel in motion. The light moves further ahead and hits a chip with numerous tilting mirrors (DMD chip). This light then passes through numerous lenses before it eventually falls onto your screen creating the moving images that you see.

As you can guess, the process is more complex than that but it only makes sense that we summarize it for the sake of everyone’s sanity.

The major drawback of the DLP technology is that its color brightness is low compared to its while light brightness level.

A solution to that was to use a LED/Laser hybrid as the source of light. This eliminated the need for a color wheel. So, the color brightness improves and such projectors draw less power and produce less heat.

Keep this in mind when you’re deciding on which type of home theater projector to choose. If it has to be a DLP, make sure it’s an LED/Laser hybrid.

These are not outrightly projector types but they fit better here. Regardless of the technology adopted by a projector, you want to consider its light source too. This should have come under the next section but it has more to do with if you want a projector or not.

Some projectors use lamps as their light source. When you see a number with lumens after it, that refers to the brightness of the lamp.

These lamps don’t last forever though. They need to be changed after about 4,000 hours. That’s a lot though but you can still find some that’ll last up to 5,000 hours. 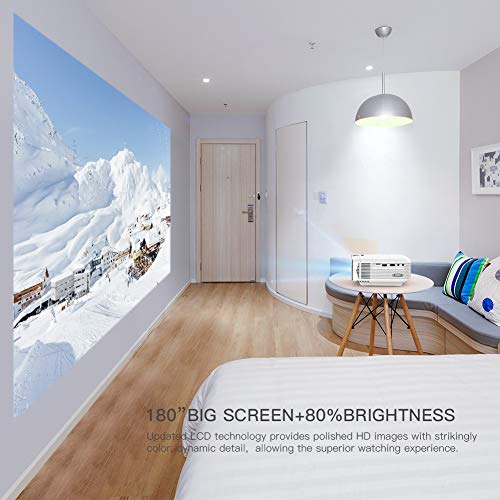 Others use LED or laser (in some cases, both). Projectors that use these types of light source lasts much longer, up to 20,000 hours. While that sounds impressive, it still doesn’t compare to the about 60,000 hours lifespan of some TVs.

Now, you’re in a better position to decide if you want a home theater projector or not.

Don’t get so hung up with the types though, it’s the quality they offer and which one will suit your needs the most that matters. Remember, you aim to enjoy great quality pictures, not bother about what type of technology the home theater projector uses.

What to Look Out for in a Home Theater Projector 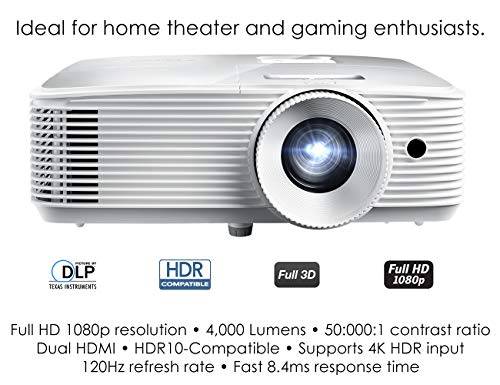 Home theater projectors are not things you can just wake up one day and decide to buy. Asides the fact that they cost quite a bit, they’re long term investments.

You want to make the best choice for your needs which we believe is your reason for being here. While we’ll tell you the features to look out for and why, choosing the ‘best’ still comes down to how well you understand your needs.

Therefore, this guide will be more useful if you first clear up your reason for wanting a home theater projector. With that said, let’s begin.

You’ll agree that a brightly colored image is better than a dim, murky one. This is why the light output of a projector is important. It has a lot to do with the quality of the image it produces aka brightness.

When choosing a home theater projector, you want to pay attention to its Lumens rating. That is its ANSI measurement for how bright its light output is. 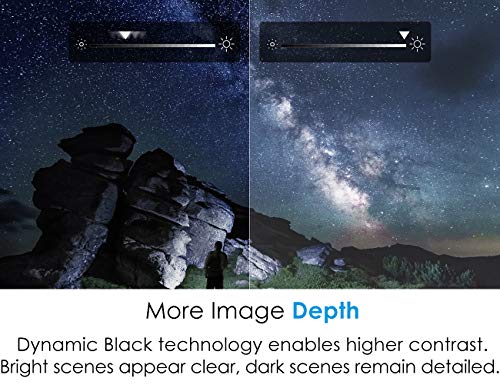 To put things in context, look out for projectors with 1000 and above lumens. This is just a benchmark as certain variables determine if even 1000 lumens is bright enough.

You have to consider the room size, distance of the projector to the screen, the screen size, and ambient light. If there will be a lot of external light such as during daytime and the sunlight gets in, you need more lumens.

Here’s a pro tip: LCD projectors have a better balance of colored and white lights than DLP. However, whichever type of projector it is, the display will be best with lower ambient light.

This should naturally come in next as it works hand in hand with brightness. The contrast ratio of a projector is what makes the whites in the picture whiter, and the blacks blacker.

If it is low, the picture will not be sharp and appear rather washed out. Look out for a contrast ratio of 2000:1. If you’ll often be watching in a low ambient room, 1500:1 contrast ratio will suffice.

This is the same as the resolution in TVs but we chose “pixel density” because it’s more appropriate considering it’s the density of pixels on a chip.

We’re in the 21st century and we don’t expect anyone interested in a home theater projector to still be watching videos in standard definition.

So, you should be looking out for native pixel count of at least 1920×1080. This is best since most of the videos you’d be watching on the projector will be HD.

If you want, you can even go a step further with a 4k projector. However, you should know that those cost more. You also have to be sure if it’s worth the investment as you’ll need 4k video sources to even get the benefits.

To have a better understanding of 4k viewing, watch the video below.

This is another factor that has to do with picture quality. To know this, you might need a demonstration as you’d have to check the color depth and tones. Pay attention to what the color looks like in the brightest and darkest parts of the picture.

Also, consider the color stability based on changes in input devices. This is quite relative as individuals perceive colors differently. The aim here is to go for what looks best to you.

How many devices would you want to connect to the projector? To make it easier, assume all the video inputs you’ll attach to your TV.

Most home theater projectors have more than one HDMI ports, which might be sufficient depending on your needs. They also have DVI and VGA ports for computers. 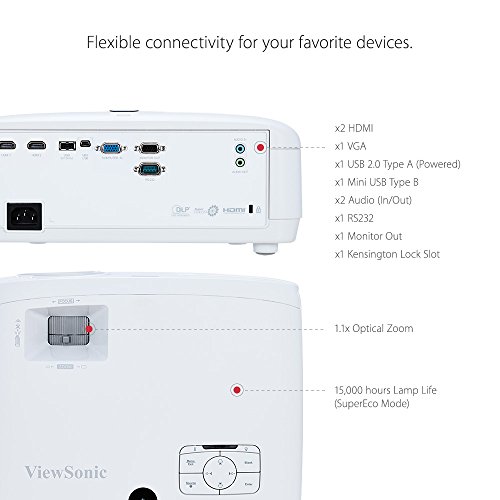 The number of ports varies from brand to brand. So be sure the one you’re going for has enough to accommodate your inputs.

Here’s another pro-tip: Many projectors come with a built-in speaker for sound output but they might not be enough for the experience you’re looking for.

If you’re setting up a home entertainment system from scratch, consider going for some of the best home theater speakers.

This might seem less important, but when you consider the versatility it can bring, it’s quite worth it. 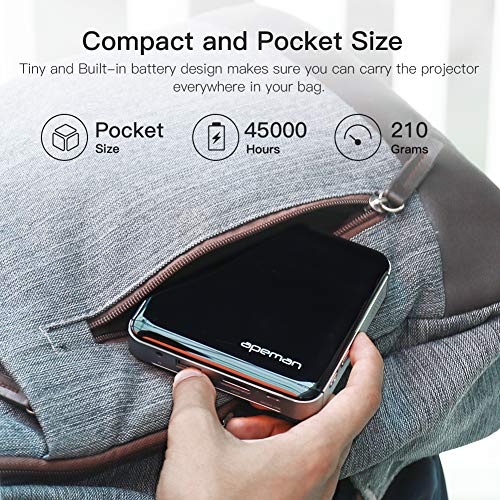 In the name of versatility, a portable projector is way easier to take outside in case you want to set up your very own backyard or drive-in cinema.

Yet another pro tip: If you have a small space, you might want to consider a short-throw projector. These don’t require a lot of distance to cast images on a screen or wall. Some can be as close as 6 inches away.

We’re sure you know projectors will still do well displaying pictures on plain walls. However, you’ll get better performance overall if you use a projector screen. 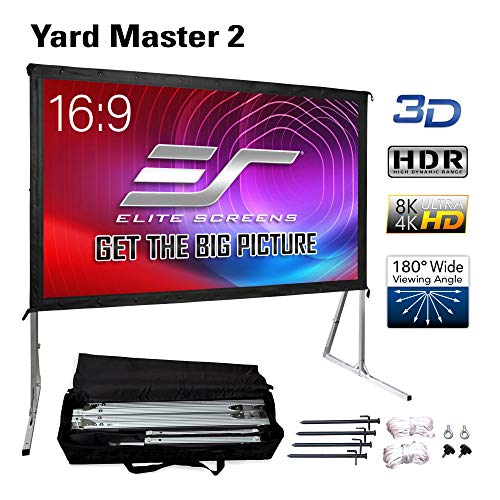 They’re made with different fabrics, come in different sizes, and, of course, the prices vary too. So, if you’re going to get one, be sure to match the screen size of the projector with the screen you go for.

Depending on how you want to use the projector, you can go for screens with a stand or a pull-down screen. Also, don’t forget to consider the aspect ratio. Some projectors display at 4:3 or 16:9. The latter is more common, so, there’s almost no chance of getting this part wrong.

If you want to truly have a cinematic experience in your home, then a projector along with a home theater surround sound is what you need. Getting a projector is almost the same monetary investment as a TV with similar specs. However, don’t get too gassed up with excitement and dabble into a purchase.

The price range of home theater projectors varies widely depending on some of the features we discussed above. Take your time to digest and understand it in the context of your needs. Then, if there any of the options we offered that you like, just click on the image to claim it. Thank you for your time. Kindly share and come back soon.

Previous Post What is Dolby Digital Plus Home Theater?

Next Post What is the Best Home Theater Projector?

We have affiliate relationships with the providers (Amazon, Clickbank, etc) of the products, goods and services that are linked to on this page and may be compensated when you buy. But do note that it doesn't increase the cost of the products to you in any way or determine our verdict on a product/service.